Apple threatens to ban far-right social media platform Parler from its App Store amid complaints it was used to 'plan, coordinate, and facilitate' attempted insurrection 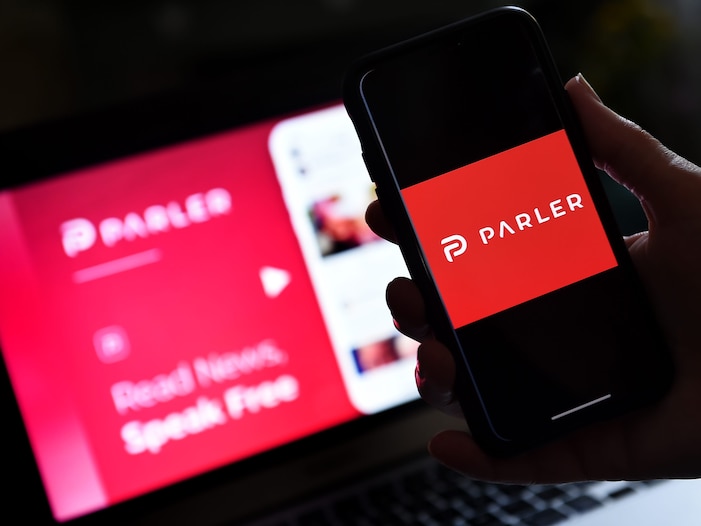 This illustration picture shows social media application logo from Parler displayed on a smartphone with its website in the background.

Apple has issued a warning to the far-right social media site Parler over its alleged role in Wednesday’s attempted insurrection, saying it may remove the app from its App Store if Parler doesn’t implement a content moderation plan, BuzzFeed News reported Friday.

“We have received numerous complaints regarding objectionable content in your Parler service, accusations that the Parler app was used to plan, coordinate, and facilitate the illegal activities in Washington D.C. on January 6, 2021 that led (among other things) to loss of life, numerous injuries, and the destruction of property,” Apple told Parler, according to BuzzFeed News, adding: “The app also appears to continue to be used to plan and facilitate yet further illegal and dangerous activities.”

Apple told Parler that it had 24 hours to implement a “requested moderation improvement plan” or the app would be pulled from the App Store.

Apple and Parler did not respond to requests for comment.

“We will not cave to pressure from anti-competitive actors! We will and always have enforced our rules against violence and illegal activity. But we WONT cave to politically motivated companies and those authoritarians who hate free speech!” Parler CEO John Matze said in a post on the social media site, according to BuzzFeed News.

Parler has risen to prominence in recent months as mainstream social media sites have faced increasing pressure to crack down on hate speech, misinformation, and calls for violence.

Following the US presidential election in November, Trump supporters flocked to alternative social networks, including Parler, to plan election protests after Facebook and other sites banned groups that pushed debunked conspiracies. From November 3 to November 9, Parler was downloaded around 530,000 times in the US, according to data from Apptopia.

As a pro-Trump mob violently seized the US Capitol building on Wednesday in an attack that left five dead, the armed rioters used Parler and other conservative-leaning social media apps to organize. Apptopia told Business Insider that Parler downloads spiked to around 323% of their average weekly volume from October.

“Hold your ground!!! Keep the ground you have gained. Do not relinquish what we have,” wrote one Parler user, who went by the handle “Immortal Noble Beard” and identified himself as a Proud Boy.

Many chimed in with posts tagged #revolution, #fightback, #firingsquad, and #civilwar. Others spread rumors that Antifa was behind the mob.

“Content of this dangerous and harmful nature is not appropriate for the App Store. As you know from prior conversations with App Review, Apple requires apps with user generated content to effectively moderate to ensure objectionable, potentially harmful content is filtered out,” Apple told Parler, according to BuzzFeed News, adding: “Content that threatens the well being of others or is intended to incite violence or other lawless acts has never been acceptable on the App Store.”