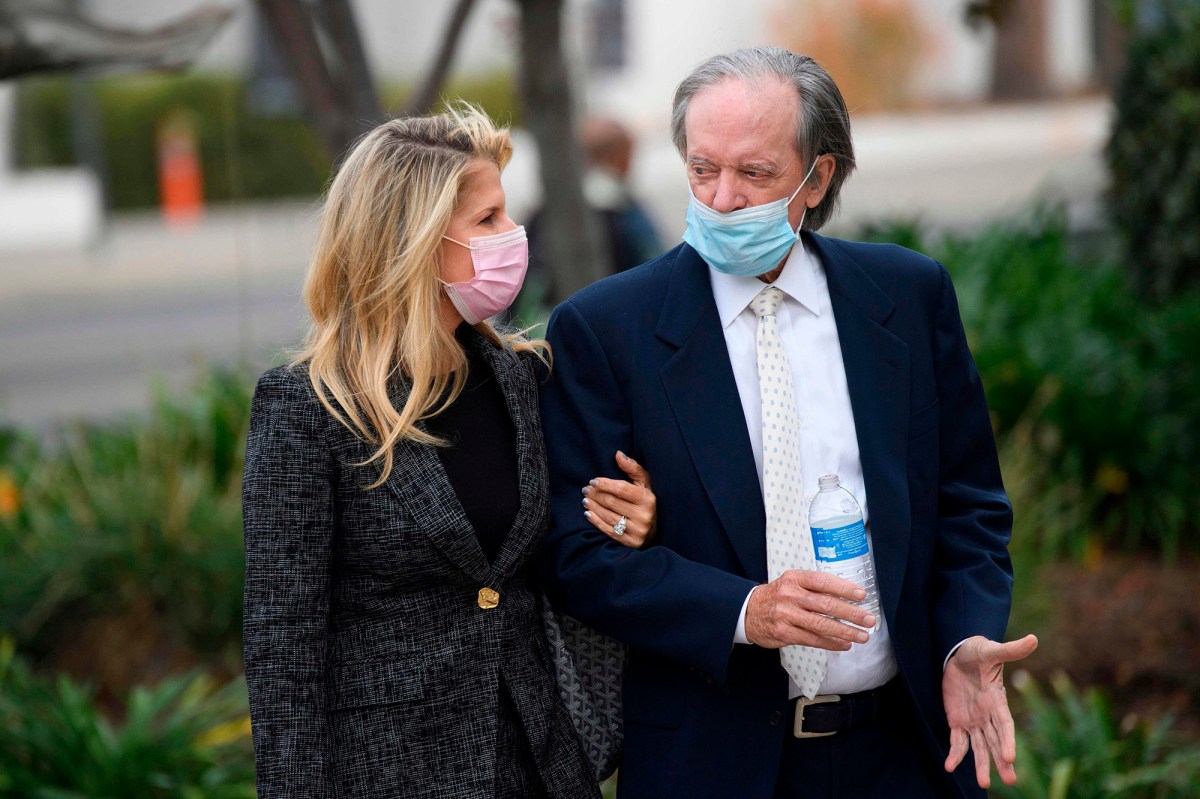 The verdict is in: Bill Gross attempted to bully his neighbor over a $1 million lawn sculpture.

A California judge ordered the billionaire “Bond King” Wednesday to stop tormenting his techie neighbor by blasting the “Gilligan’s Island” theme song on a mind-numbing loop.

Orange County Superior Court Judge Kimberly Knill said there was “clear and convincing evidence” that Gross and his partner, Amy Schwartz, blared that and other tunes to harass neighbor Mark Towfiq in retaliation for a complaint he filed about a sculpture outside Gross’ oceanfront mansion.

Speaking from the bench, Knill cited what she called credible testimony from Towfiq, his wife and two local cops who heard the racket — as well as foreboding text messages Gross fired off after Towfiq complained about the music.

In one July 31 message, Gross wrote, “Peace on all fronts or we’ll just have nightly concerts big boy.” A couple months later, on Oct. 10, he asked Towfiq, “Have you dropped the art complaint to the city?”

“Taken together … [Gross’ texts] are strong evidence nightly concerts were planned by gross in some sort of retaliation because of his dissatisfaction with Towfiq, for whatever reason,” Knill said.

The music, which played from July into October, was a “knowing and willful course and pattern of conduct constituting harassment,” Knill said.

She slapped Gross and Schwartz with a three-year restraining order banning them from playing music outside their home when no one is in the backyard pool area. They’re also barred from contacting or coming within five yards of Towfiq and his wife, Carol Nakahara, except in connection with legal proceedings or if they’re on their own property.

Knill also shot down Gross’ claims that Towfiq harassed him and Schwartz by recording them and peeping at their home. She did chastise the tech entrepreneur for filming one video of Gross in his backyard, though she said the incident didn’t constitute harassment.

“The behavior is unacceptable and if it continues it may justify the filing of a new request for restraining order,” Knill said.

Gross — worth an estimated $1.5 billion, according to Forbes — is famous for his colorful clashes. He sued Pimco, the investment behemoth he founded in 1971, for his 2014 ouster, claiming a “cabal” of junior managers plotted against him to increase their share of the bonus pool.

After his divorce was finalized in 2017, his ex-wife accused him of leaving their 13,819-square-foot Laguna Beach home, which she won in the divorce, a smelly mess, including dead fish in the vents. Gross denied the allegations.

And last year, as The Post exclusively reported at the time, Gross attempted to thwart his estranged son’s efforts to sell rare “Inverted Jenny’’ postage stamps he had inherited. The stamps ended up going to auction after the story ran and selling for $1.9 million.

While Gross and Towfiq still have to litigate their dueling civil complaints, Knill’s ruling marks a key milestone in the bizarre battle that began with simple gripe about a sculpture outside Gross’ home and exploded into a dramatic saga of threats, spying and musical torture.

“At the end of the day, Mr. Towfiq’s massive expenditure of public resources of the city, the Laguna Beach police department, and the Orange County courts to pursue his personal vendetta over our client’s art and music choices has done nothing more than result in an order that Mr. Gross and Ms. Schwartz continue to do what they have always done: keep following the law,” Basinger said in a statement.

Towfiq was initially bugged by a protective net Gross installed above the glass Dale Chihuly sculpture, which he claimed blocked the view from his own house. He lodged a complaint about the net with local officials in June — and the retired PIMCO founder fired back by blaring music at earsplitting volumes, including Led Zeppelin and the themes to “Gilligan’s Island” and “Green Acres.”

But Gross and Schwartz alleged that Towfiq was an obsessed “peeping tom” who “watched, leered at, photographed, and videotaped” the couple in their home for more than a year. They sued Towfiq for invasion of privacy and other violations in October, and he filed his own harassment complaint a day later.

Gross, 76, tried to bring an end to the hostilities earlier this month by proposing he and Towfiq drop their lawsuits and donate their projected legal costs to charity — a proposal Towfiq’s lawyer quickly rebuffed as an “attempt to spin the media.” Gross went on to give $500,000 to local charities anyway while doubling down on his demand that Towfiq join him.

“This case never should have gotten to this point,” Gross said in a statement Wednesday. “Mr. Towfiq wanted his 15 minutes of fame but got it at the expense of the county, its courts, and those in need.”

Towfiq’s lawyer, Chase Scolnick, praised the ruling, despite the judge’s verbal slap on the wrist for his client.

“Our clients have been living a nightmare,” Scolnick said. “Everyone can empathize with having a horrible neighbor, and we look forward to the next stage where Gross and Schwartz have to face a jury with their lies.”