How will Biden's administration impact space investing? We asked the creator of the first pure-play space ETF, who highlighted the stocks and sectors that could benefit from Democratic policy — and… 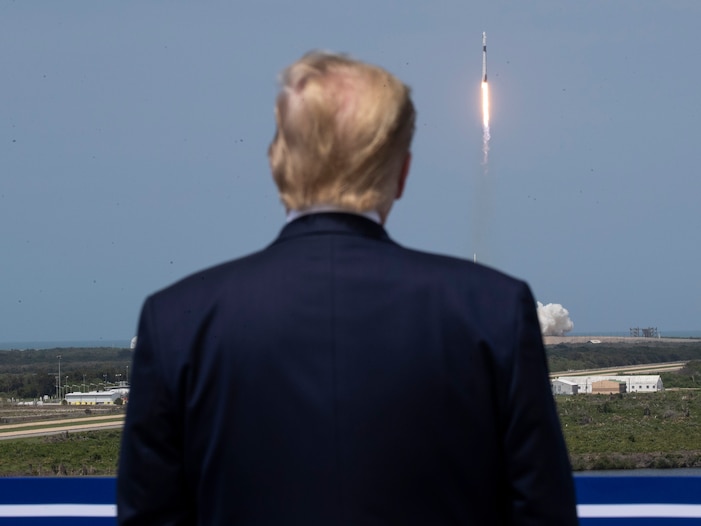 President Donald Trump has positioned himself as one of the space industry’s most ardent supporters.

While the size of the role the Trump administration has played in space-related ventures in recent years is disputed, the president has positioned himself as one of the industry’s most ardent supporters.

He can indeed take credit for starting the Space Force, the fifth branch of the US military, and he’s called for budget increases to NASA.

In short, he has been good for investors in space-related firms.

Now, some are worried that president-elect Joe Biden could hurt the industry.

“The Trump administration has been one of the best supporters of the space industry,” said ProcureAM’s Andrew Chanin in a Nov. 13 interview with Business Insider. Chanin is the creator of the first pure-play space exchange-traded fund, UFO.

“So some people are concerned when you have a new regime come in, as petty as it is, sometimes they look to backtrack or slash or discredit ro pull back financing from areas that were major campaign and administration priorities,” he added.

Though this is a worry, Chanin said he thinks the non-partisan nature and strategic importance of space in terms of defense will stop any potential decreases in government investment in the industry.

“Space has been and now is more essential an industry for American interest than ever before. And you can’t just pull back — to get out of that driver seat would put America at peril for decades if not centuries,” he said.

He continued: “It could be, in my opinion, something that down the road America looks back at as the biggest failure in American progress if we at any level decide to reduce our focused investment.”

Yet, the space industry isn’t only made up of defense and space-exploration firms. It encompasses sectors like communication services, information technology, and industrials, as well.

To figure out where investors in space might put their money in a Biden administration — and in an economic recovery environment — we asked Chanin, whose ETF contains companies in all of the above sectors, which areas he thinks could be primed for gains.

Though they should not be considered advice for individual investors, Chanin’s views on trends in the industry are below.

More broadly, one area that Chanin sees benefitting not only from Democratic policy but also from broader economic trends is broadband.

“From a Democratic policy standpoint, giving people access to basic goods now is one of those cornerstones, and internet connectivity and technology come almost hand-in-hand with water and shelter these days,” he said.

He added: “If you want to pick people up out of poverty, providing them with access to information technology, something that broadband internet strives to achieve, is one of those obvious ways.”

When it comes to the economic recovery — which now appears to be imminent with the announcement of two highly-effective vaccines — Chanin said some space-oriented companies should see boosts.

One is Boeing (BA), for example, which is foremost an airplane producer but is listed in Chanin’s ETF for the space-related revenue it generates.

“Opening up the economy and having travel pick back up — transportation and shipping and things like that were big areas that the industry took a hit on,” Chanin said. “Boeing absolutely. People need fewer planes if people are traveling less.”

He also said some satellite firms should also rebound, with travel and shipping demand returning.

“For satellite companies, one big revenue driver for some companies is airplane WiFi,” he said. “And if you don’t have people flying, they’re not going to be utilizing their services. So some of those revenue stream areas took significant hits throughout the year.”

He continued: “Shipping came to a halt, and you don’t need to track ships across oceans and cargo that they’re transporting if nothing’s moving.”

Finally, relating to broader economic trends, Chanin said one satellite firm that could benefit from increased use of robotics and drones going forward is Iridium Communications (IRDM), especially because of its L-band technology.