It's not just you: It was nearly impossible to buy the PlayStation 5 at launch thanks to resellers using the same type of bots that snatch up Yeezy drops 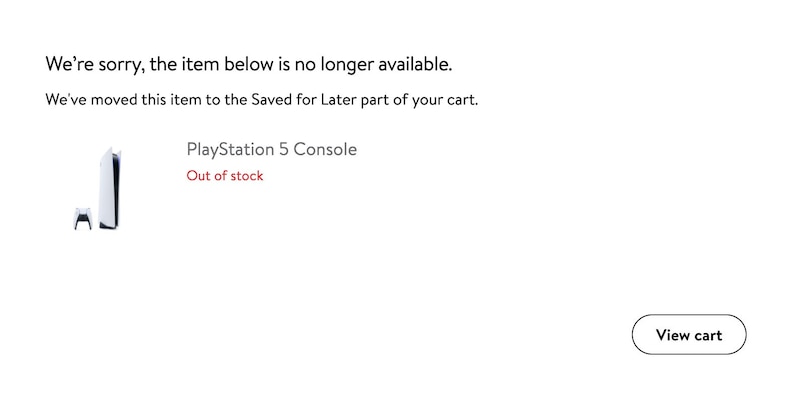 After getting to checkout, potential PlayStation 5 buyers found out the device had already sold out.

After months of anticipation, Sony’s PlayStation 5 finally launched last Thursday — but it was nearly impossible to buy the game through any online retailer.

Because of the pandemic, Sony decided not to go the traditional console launch route and didn’t sell the new game console in retail stores at launch. Instead of massive launch lines and stories of excited fans camping out overnight in front of GameStop, the main way to get a PS5 on November 12 was to have preordered the console months ago through one of several retailers.

Beyond that, PlayStation 5 buyers had one recourse on launch day: the digital storefronts of major retailers like Walmart, Target, and Best Buy. And at 12 p.m. ET on November 12, people got a look at how well that system worked.

The flood of customers was so voluminous that it caused the entire Walmart web store to crash, and users were greeted with a message explaining that the store was overloaded by too many shoppers at one time.

So, how is it that one of America’s largest retailers was unable to handle a flood of digital customers?

Some of those customers weren’t customers at all, but software designed to circumvent wait times, jump queues, and rapidly purchase high-demand items: So-called “bots” that are able to buy items faster than any human being possibly could.

While you were filling out your customer data, or waiting for the checkout to load, bots were zipping past and buying up PlayStation 5 consoles that are largely turned around for resale.

Social media and resale websites are rife with resellers who say they used bots to nab dozens of PlayStation 5 consoles on launch day:

“My bot came through,” one reseller said on Twitter. “Let me know who needs a #PS5 #Playstation5 If you haven’t secured dm me selling both digital and disc.”

Those prices aren’t wildly outside the spectrum of market value: Sneaker resale website StockX has the $500 model selling for just shy of $900 as of Monday morning.

If you’re at all familiar with the world of sneaker resale, you’re likely already familiar with the concept of bots. Broadly speaking, bot software is intended to replicate the actions of normal online consumers, but significantly faster. Retailers like Walmart employ their own software intended to thwart reseller software, but bots exist in an ever-evolving marketplace and innovation is rampant. As such, retailers are constantly working to keep up with the latest in bot software.

Effective bots are in such high demand that they’ve created their own microeconomy, with resellers fighting for access to the best ones.

Read more: eBay has been ‘asleep at the wheel’ in the sneaker category. Now, an exec explains how the platform will overtake competitors like StockX and GOAT

And its these bots that were able to rapidly scoop up at least part of the limited supply of PlayStation 5 consoles available last week.

Meanwhile, for the many people who were unable to buy a PlayStation 5 last week, it’s unclear when you’ll be able to get one.

Sony is selling the hot new game console directly to consumers, but the resupply drops are sporadic. GameStop said it would have consoles available for sale in store on Black Friday, November 27, but the only guaranteed quantity is limited to two consoles per store. Walmart is also offering sales on Black Friday, but it will only be available through the web store once again. Best Buy, meanwhile, has outright said it won’t have any additional PlayStation 5 consoles for sale throughout the rest of the holiday season.

Sony and Walmart representatives did not immediately respond to Business Insider’s requests for comment.