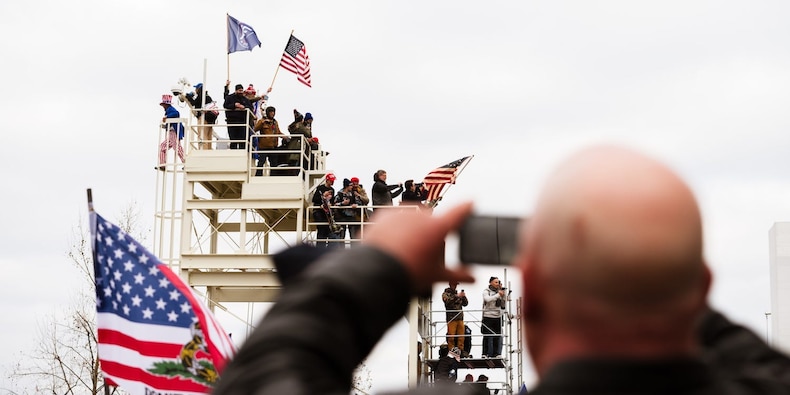 A pro-Trump protester takes a photo of other protesters who climbed a media platform after breaking through barriers onto the grounds of the Capitol Building on January 6, 2021 in Washington, DC.

The New Zealand-based film producer logged onto social media, searching for any clues, video, and photographic evidence to determine what exactly had happened and who the violent insurrectionists were.

“Watching the situation unfold in the US was incredible,” Reeves told Insider. “I’d seen talk of invading the Capitol and interrupting the certification, but I don’t think I could have imagined it would be as effective as it turned out to be.”

Reeves said that while he is no expert – and only had minimal experience with open-source investigations – he was eager to help identify some of the protesters because he always “enjoyed solving puzzles.”

“I was following many of the Twitter threads from early on. It was immediately clear that lots of photos and videos would exist, but how many would become public and how useful they’d be remained to be seen,” he added.

The task at hand was a lot more complicated: Almost every minute from almost every angle at the Capitol siege was captured and posted to social media.

Read more: Joe Biden is hiring about 4,000 political staffers to work in his administration. Here’s how 3 experts say you can boost your chances of getting one of those jobs.

The event, which resulted in the deaths of five people, including a police officer, was recorded not only by journalists and news stations worldwide but also by the rioters themselves, who used right-wing social media channels to live-stream their actions.

But the collective effort of thousands of eagle-eyed people on the internet, which has been playing out in real-time in the days that followed the insurrection, has produced some incredible results.

In a press conference earlier this week, the FBI director, Steven M. D’Antuono, said the agency received more than 100,000 pieces of digital media and had opened 170 cases against rioters.

Some of those who directly participated in the Capitol attack have been fired from their jobs after being identified and outed on the internet. 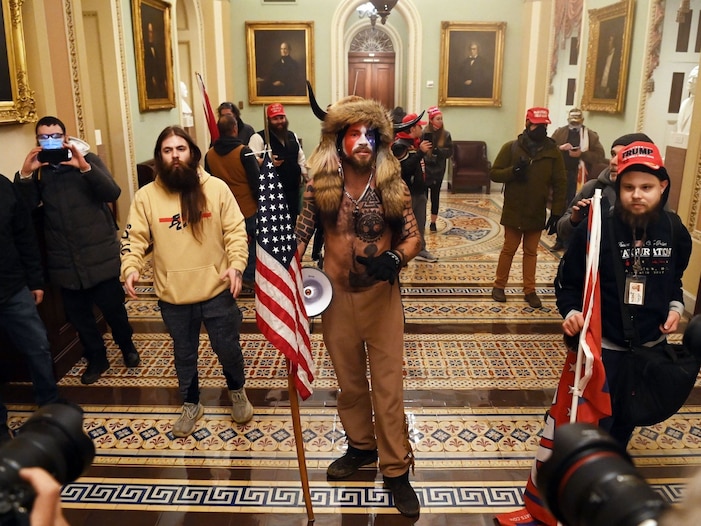 “The success being had on social media, especially as more video becomes available, is really impressive,” said Reeves.

But the film producer-turned social media detective maintains that the work he has done compared to others is minimal and that there are much bigger players in the game.

These include investigative organizations like Bellingcat and Intelligence X, both of which have already created extensive spreadsheets and databases collecting and archiving footage of the event in chronological order (many videos and social media accounts were quickly deleted in the days that followed the siege.)

Intelligence X has already collected more than 1,3000 files totaling 83GB, while Bellingcat’s spreadsheet has more than 100 examples of streams or videos.

Eliot Higgins, the founder of Bellingcat, told WIRED that his team of journalists and investigators plan to build up a timeline of what happened around the Capitol using the footage to see if they can find new evidence from the riots.

Another person who has taken the lead in the civilian investigations is John Scott-Railton, a senior researcher at the University of Toronto’s Citizen Lab (OSINT), who has successfully identified several key figures from the attempted insurrection.

One of these was decorated US Air Force veteran, Larry Rendall Brock, Jr., who was photographed in the Senate chamber dressed in full combat gear and carrying zip-tie handcuffs.

Scott-Railton, who declined to be interviewed for this article, has been using Twitter to appeal to thousands of his followers, trawling through footage, breaking down everything from the types of clothing worn, items held, and badges that were worn.

The analyst doesn’t post names publicly and has previously said he will only provide details of potential suspects to the FBI when he is absolutely sure he’s verified a person.

Another OSINT analyst Rae Baker broke down the process behind identifying and verifying rioters from pictures and videos online.

“When verifying a person based on a photo or video, I look for identifying marks such as tattoos and birthmarks,” Baker said.

“Additionally, I look for things they may be wearing, such as a work ID or clothing with specific logos that might also be identifiable in photos from their social media. The key is to verify via several different sources before identifying someone in a situation that might endanger them,” she added. 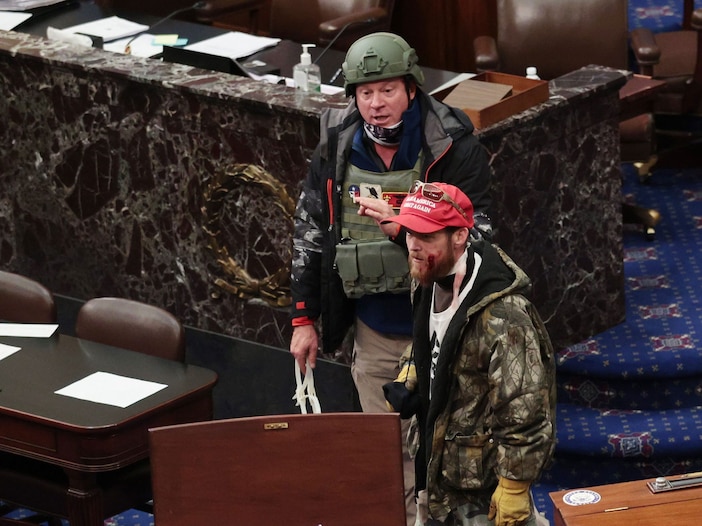 Retired Air Force officer Larry Rendall Brock, Jr., wearing a combat helmet, in the Senate chamber in the US Capitol, in Washington DC on January 6, 2021.

Other social media detectives have kept a lower profile but have still helped the efforts nonetheless. One Instagram account, called @homegrownterrorists, has been particularly active, accumulating more than 333,000 followers.

The person behind the account described themselves as a “civilian” declined to speak to Insider. On Friday, they told their followers they had received a significant number of death threats from Trump supporters.

“This has been rough. I’m exhausted and on edge/paranoid – which is not me”, the person wrote on Instagram, according to screenshots seen by Insider. “There are turbulent times ahead. But I’m staying hopeful that the sun will set on all of this in 2021. People (like me and you) are fed up. We won’t tolerate this anymore.”

Online abuse as a form of retaliation is not uncommon.

“Researchers run the risk of being identified by the very communities they are trying to gather information on. This can involve researchers being targeted online through intimidation, or worse, being targeted offline in some way,” Freya Lewis, a spokesperson for Janes Intelligence Unit, told Insider.

Reeves, who has since taken a step back from identifying people, agrees that the job can be overwhelming, especially as question marks remain around possible violence at the upcoming inauguration.

“This sort of thing is often fun, but it can also be stressful and traumatic. In some cases, people are watching violent videos over and over again, looking intensely at details,” said Reeves. “That can have an impact.”