NYC’s heating rules for outdoor dining another burden for restaurants 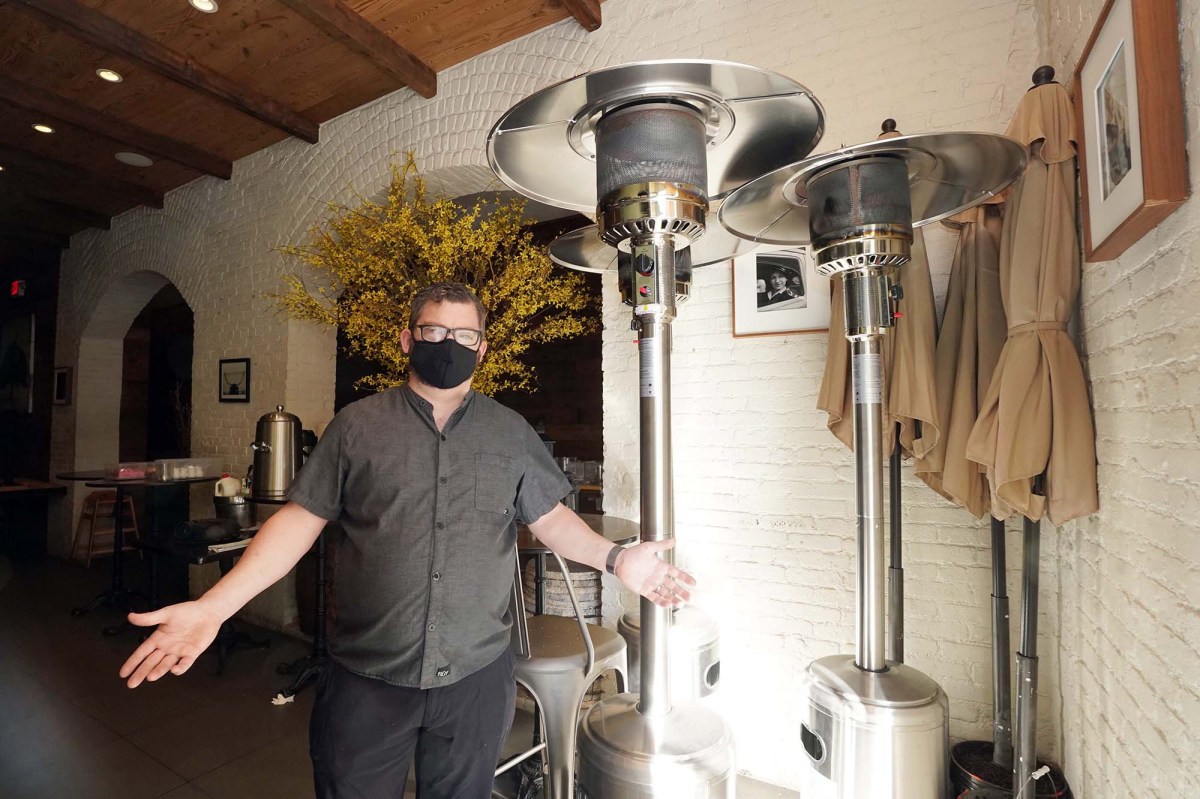 Big Apple restaurateurs say they have been left out in the cold by Mayor de Blasio as they scramble to keep outdoor dining alive this winter.

When the mayor announced on Sept. 25 that the city’s outdoor dining regulations could continue past Oct. 31, struggling restaurateurs rushed out to buy assortments of heaters to keep their patrons toasty.

But the city, working with the FDNY, didn’t release its rules for outdoor heating until a month later, on Oct. 14.

And they turned out to be so burdensome in some cases that heaters previously believed to be OK, including propane units, are now useless, restaurateurs said.

Marcus Ware, executive chef of The Milling Room on the Upper West Side, was among those who rushed out to buy propane heaters after learning that outdoor dining would become a permanent part of the city’s coronavirus response. He had planned to pair them with electric heaters to help reduce the burden on The Milling Room’s electric system.

Now, the heaters, which cost Ware about $1,000 total, are sitting inside unused because the FDNY won’t let him use them near people, which is the only reason to buy them in the first place.

“I never imagined they would consider a human being a combustible,” Ware said. “The city gave us permission to use the propane heaters. But then the Fire Department said the heaters couldn’t be too close to diners. It’s just crazy, and everyone is in the same boat.”

The FDNY’s rules say that propane heaters must be stationed at least five feet away from any “combustible material.” Sources say the Fire Department has been telling eatery owners this includes clothing, which caught some owners off guard.

“Inspectors are telling restaurants they can’t have customers sit within five feet of the heaters because of their clothes,” said Andrew Rigie, executive director of the New York Hospitality Alliance.

“So are people supposed to eat naked — or sit so far from the heaters that they don’t keep them warm?

“Essentially, the city is technically allowing the heaters, but then the Fire Department is making it impossible to actually use them after restaurants spend the money and time on getting them,” Rigie added.

Sources say the confusion could have been avoided if the mayor had come out with comprehensive rules for outdoor dining in a more timely fashion. Instead, he didn’t OK permanent outdoor dining until Sept. 25. And then it took a month for the rules to follow, despite City Hall’s promise that official guidance for “approved installation and use of heating elements” would be released before the end of September.

“De Blasio didn’t move fast enough,” said restaurant consultant Donny Evans. “The regulations should have been drawn up in August.”

The conflict couldn’t come at a worse time. More than 10,000 restaurants have outdoor dining, 10 times the number that operated outdoors prior the pandemic.

And with patrons afraid to be maskless indoors, eatery owners are dependent on outdoor dining for their very survival.

Mitch Schwartz, a spokesman for the mayor, acknowledges there are kinks in the program that still need to be worked out.

“The city is working with the industry on distance requirements, and we’ll closely consult with our fire-safety experts on adjustments as needed,” Schwartz told Side Dish via e-mail.

“This is a brand- new program, one without precedent in this city, and we’ll be nimble enough to make sure it’s working effectively for businesses, staff and diners.”

Restaurateurs say time is running out — as it’s well into November and the FDNY has been impounding some propane tanks.

One Chelsea restaurateur said that when the FDNY confiscated his propane tanks, “they apologized and said they don’t even understand the rules.” They also explained that rules around propane heaters date back 20 years to 9/11 “because they can be tricked out and turned into bombs.”

The reason they are not allowed in the street, the restaurant owner said officials told him, is because “if a car accidentally crashes, the heaters can explode.”

And while rules like that make sense, he also thinks the confusion could have been avoided if the mayor had acted sooner.

“By the time the city came out with their rules, it was too late,” the eatery operator said.

“People needed to do something to continue business. It was cold out, and heaters were getting hard to find and their prices kept going up, so people jumped the gun and bought them before the regulations were out.”