Parler has been knocked offline for not moderating threats. Screenshots show what Capitol riot supporters posted before, during, and after the unrest. 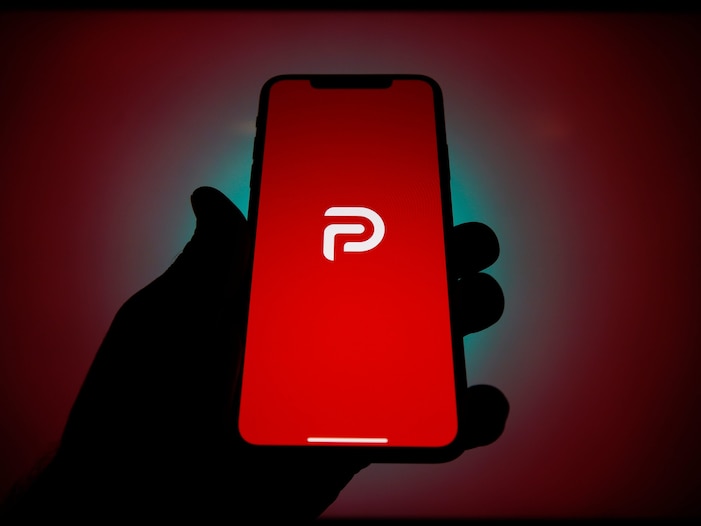 As the social media world cracks down on election disinformation and the violence it helped foment at last week’s US Capitol riot, Parler was knocked offline early Monday by Amazon’s web hosting service.

Parler, which is favored by right-wing politicians – and some extremist groups – was a last holdout in allowing posts that supported Wednesday’s violence. Those posts, some 2,000 marked with the hashtag #stormthecapitol, form the timeline of an insurrection that shook democracy, and the world. 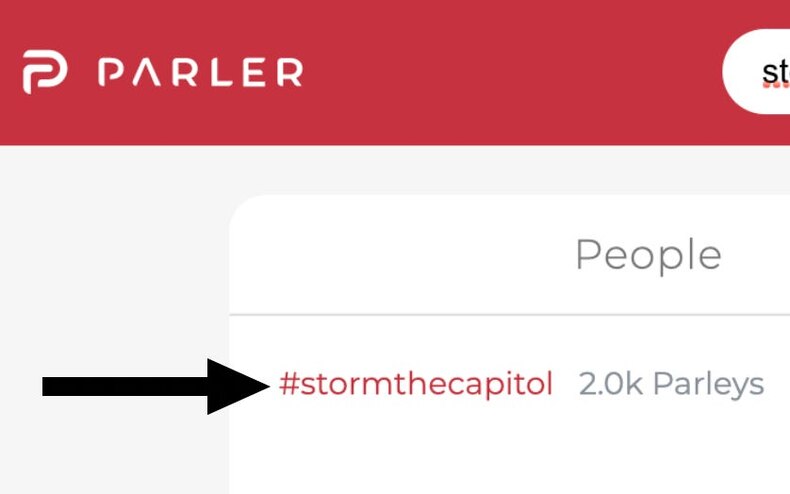 There were some 2,000 Parler posts tagged #stormthecapitol

Amazon yanked web hosting out from under the social media platform as criticism mounted that Parler failed to moderate dangerous threats to the government. Apple, which dumped Parler from its App Store, and Twitter CEO Jack Dorsey also said those posts were dangerous, and should not be visible.

Parler disagrees, and says it is a last bastion of free speech as the social media world shuts down President Donald Trump and other figures posting election fraud claims.

Parler CEO John Matze did not respond to requests for comment, but posted on the platform that “There is the possibility Parler will be unavailable on the internet for up to a week as we rebuild from scratch. We prepared for events like this.”

He said in another post that his platform “brings two people with conflicting ideas together. Our mission is free speech, democracy and us the people having the power.” He told Insider in November that he believed the mainstream press did not tell the truth about his platform’s mission to provide uncensored content to the public.

Parler posts about the Capitol riot are at the heart of arguments over how the riot took shape, the role social media played in it, free speech, and what the country faces next. They have disappeared from public view, at least temporarily, as Parler finds another web-hosting home in the cloud. 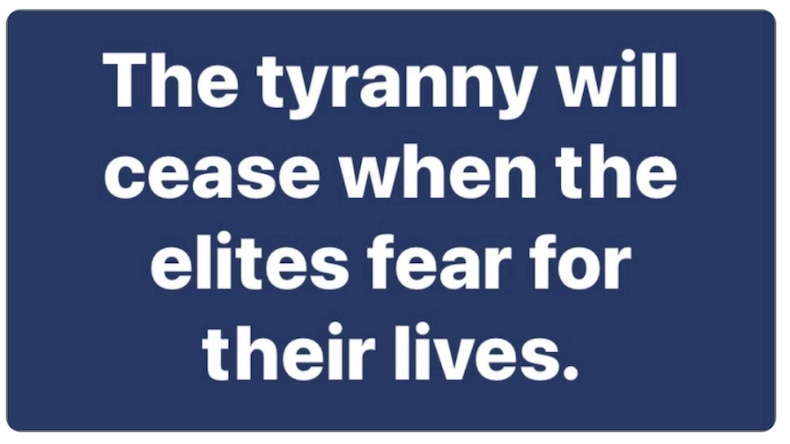 A Parler user posted this online placard before the Capitol riot.

It should also be noted that many Parler posts opposed the violence, believed the rioters should be prosecuted, and used the platform to decry the event. Many others, however, were unmoderated support for the rioters.

How bad did those posts get, and what is the story they tell of a rebellion that killed five people, damaged the Capitol, and gravely alarmed a jittery American people?

Here is a chance to decide for yourself as Parler perhaps goes dark, at least briefly.

Insider combed through thousands of the site’s posts to piece together a diary of the riot that shook democracy, and the world. We are only showing full images of posts from public figures’ verified accounts, and are quoting or redacting others.

‘The tyranny will cease when the elites fear for their lives.’

Placards were posted online and on Parler weeks in advance of the January 6 riot pronouncing “THE GREAT BETRAYAL IS OVER” and “IF THEY WON’T HEAR US, THEY WILL FEAR US.”

Other posts leading up to the event also cited intimidation as a goal. The official account of a business posted on Parler that the Washington event would have an impact when “these elites start seeing other elites getting killed” and “if the patriots started taking shots at these people and dropping them.”

A commenter on that post quoted what they said was General George Patton’s prayer before the Battle of the Bulge. That thread included an image with the quote “The tyranny will cease when the elites fear for their lives.” 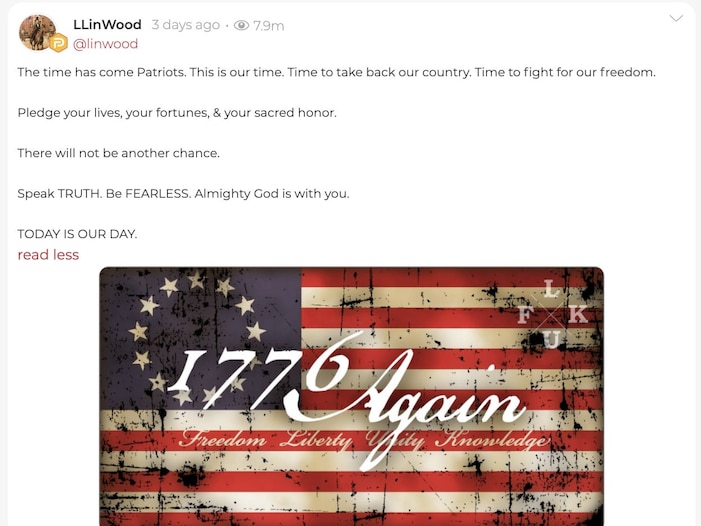 Trump lawyer Lin Wood posted this on Parler before the Capitol riot.

Prior to the riot, large right-wing accounts verified by Parler sought to energize the crowds.

Conservative commentator Dan Bongino posted “Can’t you just feel the sheer panic from the Democrats? Tomorrow is going to be HUGE.” A commenter complained that those gathering were not angry enough. “Get mad you sons of a b—-es Get mad.” Some 13 million users viewed the post, Parler showed.

Lin Wood, an attorney for Trump who called for Vice President Mike Pence’s execution on Parler – some of the few posts the company has removed – posted to those gathered in Washington: “The time has come Patriots. Pledge your lives.” The post closed with “TODAY IS OUR DAY.” Nearly 8 million people saw the post, Parler metrics show.

Team Trump’s verified account posted a video of the president saying “We will not take it any more. That’s what this is all about.” A commenter replied, “WE ARE IN DC. WAITING FOR THE CALL. ONLY WE CAN SAVE AMERICA NOW.”

Fox News host Sean Hannity posted about crowd size, and Bongino posted a video of a fiery speech by Donald Trump Jr. as Parler users caught up in the pre-riot atmosphere posted enthusiastically. One wrote a post that included: “War, war war!!!!! Bring this s— on!!!!”

‘Grab all weapons and head to DC’

The official account of The Proud Boys, which has 349,000 followers on Parler, posted a photo when rioters broke into the Capitol: “Patriots have made it to the doors of the Senate chamber.”

Parler users enviously cheered the rioters on. “More! More! More!” one wrote. “Drag them out of the Capital.” Others wrote “Beat the snot out of the cops,” and “Hang all the traitors!” 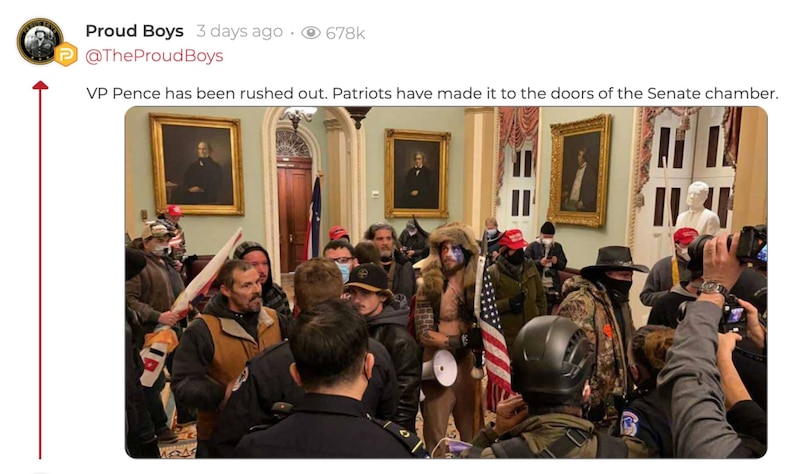 Many posts urged the lynching of Democrat leaders and Vice President Mike Pence. One named a half-dozen lawmakers and urged “Drag em in the street. Burn em!” Others urged the rioters to burn the Capitol down because of election fraud the president has cited, despite a lack of proof.

“All nearby should drop all plans, grab all weapons and head to DC,” one user posted. “Storm the castle!”

Some 1,500 users liked a post that read “HARD DRIVES FROM CAPITOL BUILDING HAVE BEEN CAPTURED – NOW WE WILL LEARN THE TRUTH.”

One user simply posted beneath an image of the rioting the world “BEAUTIFUL”. 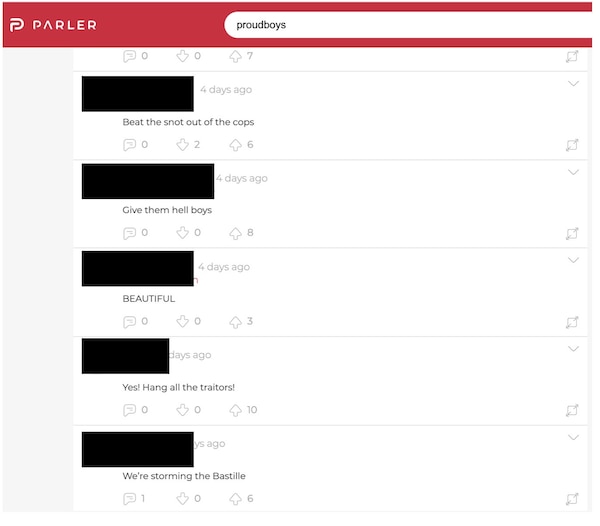 Parler users respond to a Proud Boys post during the Capitol riot.

‘DONALD TRUMP ASKED US TO COME TO DC’

When the riot subsided and police began to gain control of the mob, the tone of the posts changed.

“Calling Donald Trump. Mayday mayday. We are being pushed back. Need more backup,” one wrote.

Another posted a video of clashes with police, writing, “As curfew passes, police go in hard on Trump supporters.” A commenter on the post said, “DONALD TRUMP ASKED US TO COME TO DC. THIS IS NOT WHAT WE ASKED FOR OR EXPECTED.”

Other posts pleaded with retired Army general and Trump supporter Mike Flynn to come and lead them. One posted that a video of the president asking protesters to restrain from violence was fabricated. “TRUMP REPORTEDLY CALLS FOR PEACE – BUT WHITE HOUSE STAFFERS SUGGEST VIDEO ‘DEEP-FAKE’,” the post from a verified account said. It was liked by users 325 times.

When the president urged support for Capitol police, one poster on Parler said, “Capitol Police are macing us… whose side are you on then.”

Many posts on Parler seemed to feel disillusioned after Trump called for an end to the violence. “Today my America died,” one said.

But that quickly shifted to determination to go beyond last week’s riot for further unrest next week in the nation’s capital. “ALREADY HAVE MY ROOM SET FOR JAN 16-20!” one said, adding that he wanted to “GRAB AMERICA BY THE P—Y,” a reference to a recorded comment by the president from before he was in office.

“IT’S ABOUT TO GET REAL,” one Parler user posted after the riot. “EVERYTHING IS GOING TO BURN… NOW THEY’LL SEE A REAL RIOT.”

The day after the insurrection, a Parler user posted that Washington leaders did not expect for “a million patriots to come thru the front door and lynch them in the streets. They have never feared the people until yesterday.” He closed his post with the line “And it ends on the 20th.”