Twitter and Facebook both banned Trump from their platforms. Here's why that doesn't violate the First Amendment – or any other laws 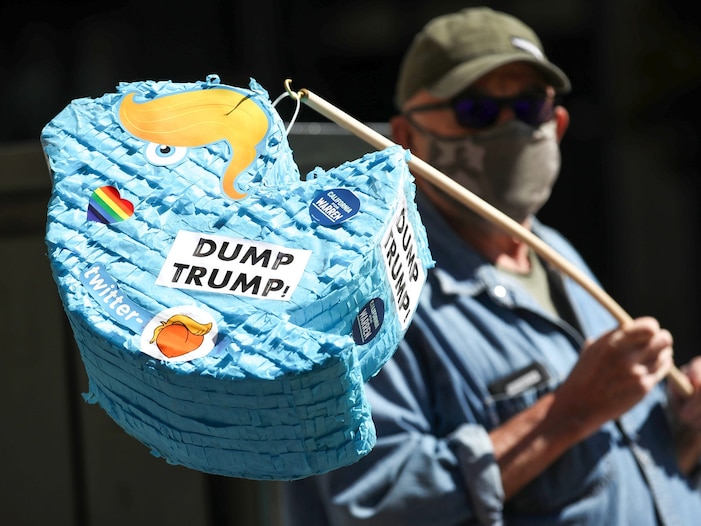 After months of escalating tensions between President Donald Trump and social media companies, Twitter and Facebook finally decided this week that the president had crossed a line too far.

On Wednesday, after Trump incited a mob of his supporters, thousands of them violently stormed the US Capitol, where Congress was voting to certify the results of the election, in an attempted insurrection that left five dead.

Though Trump posted a video briefly denouncing the violence, he then continued to use social media platforms to praise his supporters and once again repeat debunked conspiracy theories about the election.

Twitter and Facebook, both of which have policies against inciting violence, undermining democratic processes, and spreading election misinformation, decided that – given the impact that the president’s comments were having and continue to have – they would no longer let him use their platforms.

Twitter suspended Trump’s personal account, @realDonaldTrump, permanently, citing “the risk of further incitement of violence.” Facebook and Instagram suspended Trump “indefinitely and for at least the next two weeks until the peaceful transition of power is complete.”

Read more: Google and Apple are banning Parler from their app stores for allowing violent content in the wake of attempted insurrection that left 5 dead

Within hours of Twitter’s ban on Friday, Trump tried to bypass it by tweeting from the official presidential account, @POTUS. He posted a series of tweets railing against the social media company for “banning free speech” and taking aim at one of his favorite targets, Section 230. (Twitter quickly removed the tweets.)

Here’s why Twitter and Facebook, like other social media companies, have the right to ban Trump, and why Trump and other far-right politicians often take it out on Section 230.

What is the First Amendment?

The First Amendment to the US Constitution says: “Congress shall make no law respecting an establishment of religion, or prohibiting the free exercise thereof; or abridging the freedom of speech, or of the press; or the right of the people peaceably to assemble, and to petition the Government for a redress of grievances” [emphasis added].

In other words, it bans the government from infringing on free speech (with some limited exceptions).

What does that mean for social media companies?

“The First Amendment is a constraint on the power of government. It doesn’t apply to Twitter,” said Daphne Keller, an attorney and internet law expert who leads the program on platform regulation at Stanford University’s Cyber Policy Center, adding: “Twitter is not a state actor.”

Why are Trump and his allies so mad then?

Trump, his allies, and others who have been hit with account suspensions, had warning labels applied to their posts, or had their advertising revenue shut off by companies like Facebook, Twitter, and YouTube may disagree with those companies’ rules or approach to enforcing them – or they may just be mad that they can’t get their message out or make money from their audience or advertisers.

But legally, there’s very little they can do.

Section 230 of the Communications Decency Act of 1996 gives legal protections to “interactive computer services” – like social media companies – that: 1) prevents them from being held liable for content posted by their users (with some limited exceptions), and 2) allows them to moderate content on their sites as they see fit.

“Section 230 makes it relatively easy for platforms to go to court and win saying ‘we have the right to enforce whatever policies we want,'” Keller said. But even without Section 230, she said, Twitter would win if Trump sued “based on their own First Amendment right to set editorial policy on the platform.”

So, why do Trump and his allies still want to get rid of Section 230?

Trump and many far-right politicians have repeatedly claimed (without evidence) that social media companies are systemically biased against them, and they believe repealing or curbing Section 230 would allow them to use the government to deny Section 230’s legal protections to platforms that aren’t “politically neutral.”

Ironically, that’s exactly what the First Amendment prohibits, which legal experts quickly pointed out when Trump tried to use executive orders to accomplish that last summer. (Still, Trump loyalists in the Federal Communications Commission tried to implement it anyway.)

What would happen if they did repeal Section 230?

Ignoring for a second that it’s legal for social media companies to be “biased” when enforcing content rules, right-wing politicians’ criticisms of Section 230 tend to ignore several key facts about who social media currently benefits – and who it would benefit if they repealed the law.

First, the evidence has consistently shown that conservatives tend to enjoy some of the widest reach and engagement on sites like Facebook, Twitter, and YouTube – or at the least, conservatives have failed to produce evidence that their views are being silenced or their reach is being throttled.

Second, if social media companies lost the legal protections offered by Section 230, they would be more, not less likely to remove questionable content from their sites, because they’d (rightfully) be fearful of getting sued.

That purge could very likely hurt far-right accounts – something Facebook itself has implicitly acknowledged, according reports from The Wall Street Journal and The Washington Post.

And increased legal liability could also make it harder for new competitors, like “alternative” social media sites Parler, Gab, and MeWe – where Trump supporters have flocked due to their lax approaches to regulating content – to get off the ground in the first place.