What is a stock market crash? Understanding its causes and consequences can help investors prepare for a sudden, severe drop in share prices 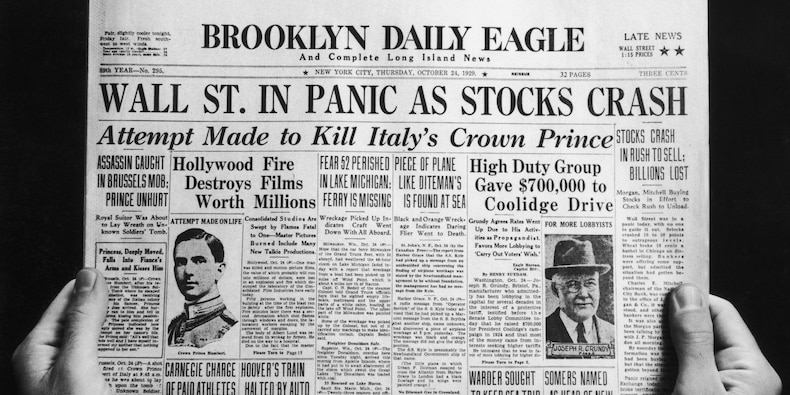 A variety of factors and events can cause a stock market crash, an abrupt and unexpected collapse in share prices across the board.

The stock market is constantly moving, prices of individual equities rising and falling throughout the trading day. Whenever the majority of them – or a representative group of them, called a stock market index – takes an especially large dive, a panicked cry often arises:

But what causes them? And what are the after-effects?

Here is a closer look at what a stock market crash really is and what you need to know before one impacts your portfolio.

What happens when a stock market crashes?

There are many definitions of what a stock market crash is. Some categorize a crash strictly as a stock market or a stock market index (a representative sampling of stocks) losing more than 10% of its value in a single day. Others provide a more general view, simply stating that a crash is a significant or dramatic loss in the stock market’s value, and the prices of shares overall, usually within a short period of time.

Any way you look at it, a stock market crash happens when confidence and/or value placed in publicly traded assets goes down, causing investors to sell their positions, and move away from active investing, and towards keeping their money in cash, or the equivalent.

The impact of a crash can vary as well. Sometimes, it’s limited. For example, on Oct. 19, 1987, after five years in a strong bull market, the Dow Jones Industrial Average (DJIA) and S&P 500 both dropped over 20%, following markets throughout Asia and across Europe. The crash was short and markets quickly recovered.Within a few days, the DJIA regained more than 43% of the points it lost and within nearly two years the market had recovered almost 100%.

At other times, the effects are widespread, and longer-lasting. The most notorious example is the Crash of 1929. Stock prices dropped first on Oct. 24th, briefly rallied – and then went into free fall on Oct. 28-29. Ultimately, the market lost 85% of its value. Though not the sole cause, this crash was one of the contributing factors of the Great Depression, the worst economic period in American history, lasting nearly 10 years.

What causes a stock market crash?

Historically, stock market crashes often occur after a long period of economic and/or market growth. Confidence in the economy, steady stock gains, and low unemployment are all drivers of bull markets, as these sustained rallies are known. As more and more stocks are purchased, prices go up – both of individual equities and of the stock indexes themselves.

But in the world of securities, prices can’t keep rising indefinitely, and bull markets can only last for so long before something happens to turn the tide. Sometimes it’s a general shift in sentiment, as in 1929, but usually some precipitating event occurs.

Numerous things can cause a stock market to crash, including:

The 20 biggest drops in the New York Stock Exchange, ranked by percentage drop in the Dow

An example of a stock market crash

Sometimes, crashes are due to several factors. One example is the Dotcom Bubble-induced Crash of 2002.

It started with speculation. A boom of investing in internet companies prevailed through much of the late 1990s. E-commerce was the new frontier for investors and money flooded the rapidly evolving technology sector and inflated valuations beyond profits these companies could ever realistically provide.

Venture capitalists swooped in early to provide funding to dotcoms that were on the rise towards going public, quickly cashing out after their overpriced debuts. Excitement over internet tech and the future of business mixed with companies that had yet to turn a profit pumped up an economic bubble.

In 2000, the Federal Reserve increased interest rates (partly to stem the overheated investment activity) and poor financial performance from dotcoms began to surface, bursting the bubble and throwing the NASDAQ index into a bear market. By October 2002, the tech-heavy Nasdaq Composite index had fallen more than 75% from its March 2000 height of 5,048.62.

A recession began, which was exacerbated by the Sept. 11, 2001 terrorist attacks in New York City that shut down the New York Stock Exchange and other markets for several days. In between the economic uncertainty and the shadow of war, stocks crashed when trading resumed on Sept. 17. The government had to step in with economic stimulus policies before the economy as a whole began to recover from two major blows so close together.

Can a stock market crash be prevented?

There really is no way to prevent the stock market from crashing. However, governments have added safeguards to prevent severe drops and upsets in market stability.

Once such tactic is the circuit breaker, instituted after the 1987 crash. If the S&P 500 Index experiences a drop of 7% or more over the previous day, trading in all US stock markets are halted. Depending on the severity of the drop, trading could be suspended for either a 15-minute period or the rest of the day. The purpose of this measure is to give analysts and investors time to gather enough accurate information before making trade decisions.

Large amounts of stocks might also be purchased by private investors to try and stabilize a market. In fact, that used to be quite effective a century ago, shortening the Panics of 1873 and 1906. The government itself can step in, lowering interest rates to encourage investors to borrow and buy.

But even with these mitigating factors, crashes still happen.

What should you do if the stock market crashes?

First thing: Don’t panic and sell out. Yes, it’s hard to hold on and watch your portfolio balance shrink. But unloading when prices are falling is rarely a winning move. Markets tend to shift back over time and you could end up losing money in the long term if you sell when shares are low.

Remember that crashes can be short-lived, and prices may quickly rebound.

This is especially important for older folk or retirees who are looking to live on their investment income or capital gains. They may not have enough time to recoup their losses before needing to use that money for day-to-day expenses. Becoming more anticipatory with market shifts becomes more important the closer you are to this point.

One advance strategy is to ensure that you have a strong mix of defensive stocks in your portfolio. These are securities that are much less influenced by disruptions in the market and tend to be in industries considered to be essential, such as utilities and food. If the market crashes, they may feel some financial pain. However, it will be much less than with cyclical stocks, which are in industries greatly dependent on a flourishing economy to grow.

If you see economic conditions start to shift toward leaner times, and stocks seem to be entering a prolonged sluggish phase – a bear market – you may want to pull your investment dollars out of the market and place them in a safer financial product that can still earn money. Shifting to CDs or bonds when volatility in the market is getting perilous can be a good move to safeguard your money until things stabilize.

The natural cycle of markets is to rise and fall. While crashes in the stock market can result in crippling losses, economies inevitably bounce back. This makes a strong case for taking a long-view approach to investing. That means creating a strong portfolio that will hold up to dives in market values and provide a healthy mix of securities that will grow when times are good and see you through when times are lean.

Though the thought of a market crash may be scary, recovery will eventually come. You just have to invest carefully to minimize your risks and keep a close eye on economic conditions.

The different shapes of recovery: Understanding how quickly and strongly an economy can bounce back after a recession

The main causes of the Great Depression, and how the road to recovery transformed the US economy

Business cycles chart the ups and downs of an economy, and understanding them can lead to better financial decisions