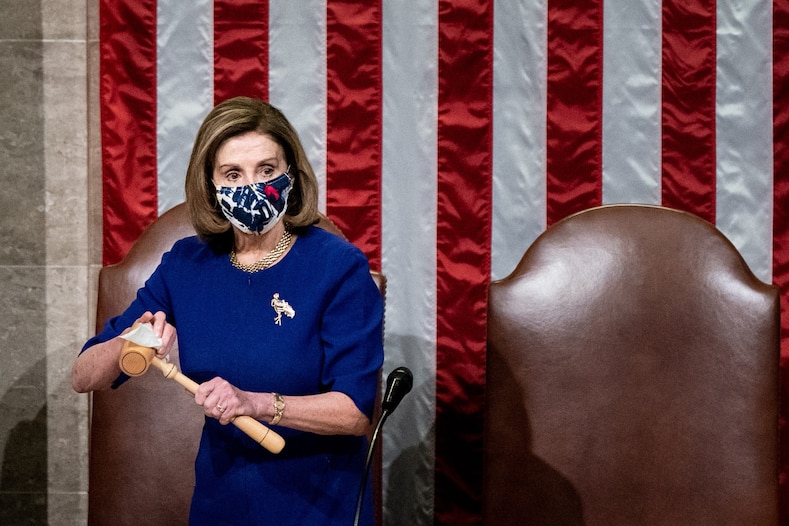 US House Speaker Nancy Pelosi sanitizes the gavel after Vice President Mike Pence walked off the dais during a joint session of Congress to certify the 2020 election results on Capitol Hill in Washington, U.S., January 6, 2021.

When US Capitol staff returned to work following the violent insurrection by pro-Trump extremists, they found broken windows and their offices pillaged.

A laptop that belonged to an aide to House Speaker Nancy Pelosi was one of the items reported stolen.

Drew Hammill, Pelosi’s deputy chief of staff, announced last week that the aide’s laptop, which he said was “only used for presentations,” was taken from a conference room in the Capitol.

While far-right activists have already started spreading misinformation about the device – with some claiming it was taken by US Special Forces because it contained evidence of election fraud – there is no evidence that’s the case.

The disinformation has stemmed from comments made by Retired Air Force Lt. Gen. Thomas McInerney.

McInerney has falsely claimed that Antifa is responsible for the riots and that panic over the laptop, which he claims is full of damning information, is why Democrats sought to impeach President Donald Trump.

Ken McGraw, a public affairs officer for US Special Operations Command, told USA TODAY on Wednesday the agency had nothing to do with the missing laptop.

“We have not received any reports or information that anyone in Special Forces or any other Special Operations Forces units entered the US Capitol on 6 January and stole Speaker Pelosi or any other congressional members’ laptops during the riot,” he told USA Today.

Another false viral claim about the laptop alleged that Trump was at Cheyenne Mountain military base in Colorado Springs, Colorado, looking at “evidence” taken from the laptop.

According to Snopes, this claim seemed to stem from a post on the right-wing social media platform Parler, which has since gone offline after Amazon stopped hosting the website due to violent content.

The post also falsely claimed Pelosi was “stopped at the border” and would be brought to an “undisclosed location” as a result of the “evidence.”

However, according to Trump’s public schedule, he has not visited Cheyenne Mountain. Save for a trip to Alamo, Texas on January 12 to visit the border wall, the president seems to have not left DC since the Capitol siege.

There’s also no evidence Pelosi took a trip to the border. Snopes reported the Parler post was shared on January 6, however Pelosi was in Congress late January 6 and into the early morning hours of January 7, finishing the certification of the electoral votes.

The laptop isn’t the only device that was taken during the insurrection. CNN reported that House Rep. Jim Clyburn of South Carolina reported an iPad stolen.

There have also been false claims about papers being stolen from offices in the Capitol.

The fake letter, which Keefe edited to show it was photoshopped, appeared to show Pelosi giving the mayor of Portland advice about how to blame Trump for civil unrest.